Construction Management Professor Dr. Phil Barlow has just been named the AGC Outstanding Educator for 2017. Phil's work as an educator, a mentor of students, and as a colleague in the construction industry set him apart as an outstanding leader and role model for this award. AGC was particularly appreciative of his work advising students in the Cal Poly CM program. Phil will receive a $5,000 award for himself as well as two $2,500 scholarships for eligible Construction Management students.

Since 1985, the AGC (Associated General Contractors) Education and Research Foundation has recognized annually an educator who makes a significant mark in the field of construction education. The Outstanding Educator award is based on a nominee’s academic contribution as well as his/her work with students outside of the classroom and involvement with colleagues in the industry.

Thank you for supporting our 2017 NAHB Competition Team. We are proud to inform you that our team finished third place in the Residential Construction Management Competition held at the International Builders’ Show in Orlando. This is a tremendous accomplishment for Cal Poly as 35 other universities participated in the competition. Our success on the national stage is attributed to your mentorship and commitment to furthering our education and careers.

Our interdisciplinary team was comprised of 13-students ranging in majors from Construction Management and Architecture to Finance and Accounting. Each team member contributed a unique perspective and skill-set that helped our team achieve a podium finish. This experience not only provided us great insight into the construction and development industries, but is a prime example of what collaboration and hard-work can truly accomplish.

“I’m proud of the professional proposal our team put together over the past several months that lead to taking home third place at the RCMC last week. This experience truly exemplifies Cal Poly’s motto of “Learn by Doing” and will be remembered as one of our most valuable experiences in our education as we embark on our careers.” 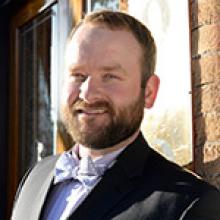 Congratulations to our colleague Dan Knight, who has been named one of 20 under 40 Best and Brightest Leaders.

According to the Tribune newspaper article: "Now in its 12th year, the competition honors the accomplishments and achievements of young women and men under the age of 40 who have demonstrated excellence in their professions and a profound commitment to community service. To be eligible, nominees must have lived and worked in the county year-round.

Ninety-five individuals were nominated for the honor. Six judges representing both the private and nonprofit sectors evaluated the nominations, selecting the winners at The Tribune’s request." 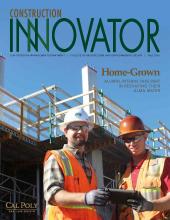 The latest edition of Construction Innovator is out and headed to your mailbox. If you can't wait to read it, check out the on-line edition.

Cal Poly CM Department Sent four students to Reading, UK to compete in the ASC Region 8 Competition. Unlike the other ASC Regions the department competes in (notably Region 6/7 and 3), this competition allowed for a team of four students instead of six and pit them against teams from schools around the world.

Professor Lonny Simonian went as their coach and states that, "Our team performed admirably and the students represented Cal Poly exceptionally well.  Although not selected for one of the three final presentations, Cal Poly and Oklahoma Sate were the only two exclusively US teams receiving an honorable mention (placing fourth or fifth), the students were widely congratulated for their runner-up position.  Whitney Bevan (ASC Region 8 host) praised our students for their work and mentioned that the selection of the final three teams was much more difficult than anticipated.  Cal Poly and OS were the only US schools specifically given public accolades and singularly noted for their achievement."

The students all commented that this international competition was a great learning experience and remarked how distinctly different it was from both the Region 7 and Region 3 ASC competitions. For example ASC Region 8 only hosts a single competition across all categories as opposed to ASC region 6 & 7 which offers twelve categories.

The project was a seven building complex consisting of 649 student bedrooms along with a facilities management and reception building.  There were a number of challenges associated with the project, and various health and safety issues that required attention.  Prefabrication was used extensively to meet aggressive schedule requirements.

The aim was, as much as possible, to fit together components on the day of delivery. Panels were lifted from delivery lories straight into position onto the new buildings, which helped create a very tidy site with minimal space required for material storage.

This is the second year that the CM Department has fielded a Region 8 team.

For more information on the Region 8 competition, go to: http://region8.ascweb.org/

This year the CM Department sent three teams of six students to the ASC region 3 competition in Downer's Grove, IL. Much like the Region 6 & 7 competition held in Reno, NV.,  the students were pitted against other teams in the categories Electrical, Concrete and Pre-Construction. The CM department emerged with a first place trophy in the Electrical division for the second year running.

For more information on the competition go to : http://ascregion3.wixsite.com/ascregion3

The goal of the Cal Poly Student Passport Initiative is to reduce dependence on the local electricity grid, encourage carbon neutrality, strive for net-zero consumption, build teamwork and better a community.

The Rotary Club of San Luis Obispo recently completed construction of a new stage at the Dallidet Adobe and Gardens. The new addition was dedicated with a ribbon-cutting event and reception in the garden of the adobe, with History Center of SLO County members, staff, volunteers and members of the community attending.

The project was funded, managed and staffed by Rotarians, with help from Cal Poly construction management students.

Based on a design by past History Center president Chuck Crotser, the redwood beams echo the wooden porch of the historic Dallidet Adobe.

The stage will provide a safe backdrop for the concerts, educational programs and weddings that are held there.

The Associated Schools of Construction Region 6 & 7 Competition is an annual event that most CM students look forward to. Since the department fields twelve teams of six - plus two alternates- a large number of students are allowed to participate each year. The 98 students left on two charter busses at 5:30 am on Wednesday, February 10th. The teams were sequestered for the majority of the day Thursday, and many chose to stay in their rooms prepping for presentations on Friday. Saturday morning the results were announced at the awards ceremony. Cal Poly's Construction Management Teams won the following:

An interdisciplinary team of Cal Poly students captured second place in the four-year college category at the 2016 National Association of Home Builders (NAHB) Residential Construction Management Competition. The competition challenged students to prepare a land acquisition proposal, including building cost estimates, a construction schedule, projections for cash flow and return on investment, and marketing and risk analysis. The team of business, architecture and construction management students collaborated to complete each aspect of the proposal before presenting their proposals and defending their project to a panel of industry experts. This year’s second-place award marks the 11th time since 2001 that Cal Poly has finished in the top five at the competition.