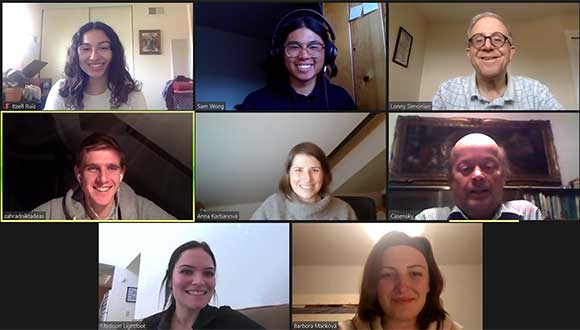 Three students from each university formed the Design-Build team whose problem focused on the Deadwood at Main complex in Dallas, TX. The competition took place over the weekend, so students worked on it in their free time and thanks to the time difference between Prague and Oklahoma, which is 7 hours, mostly at night. After the submission of the final report, on Monday, February 22, in the evening, an online presentation and defense before a professional jury took place. At midnight of the 22nd (Prague time), the team found out that their hard work had earned them second place.

"Cal Poly and the Czech Technical University, Prague, only had a short amount of time to assemble a combined team.  The students learned to quickly work together, identifying areas of strength, roles, and responsibilities.  Their project submittal, and presentation, were warmly received, earning them a second-place finish in the Design-Build competition; a first entry by either university in this ASC region," says Cal Poly Professor Lonny Simonian.

"I believe that an equally significant benefit in addition to the location was that our students had the opportunity to work in international teams, where representatives of various specializations, such as construction management, architects and the like, also had to agree on work. Compared to the past, a new experience has been added, namely working online, where half of the team was in various places in the Czech Republic and the rest in the USA. This allowed them to acquire new work habits, as well as possible important contacts for their future practice. In particular, the style of online cooperation will obviously become more important in the near future, "says Ing. Martin Čásenský, CSc.,faculty of Civil Engineering of the Czech Technical University.