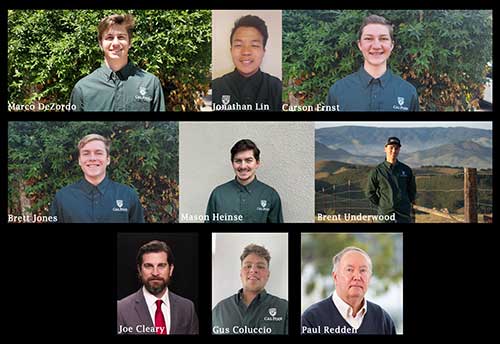 The contest, held virtually, was CPMCA’s inaugural competition. It was open to university teams across the U.S. that have construction management and construction engineering programs with student MCA chapters.

It tasked students with simulating a mechanical contractor submitting a proposal to win a “tenant improvement build-out project” in West Los Angeles. The student teams were given from Feb. 25 until April 2 to submit their proposals.

“We were asked to provide a variety of prequalification data and project-specific information,” said team captain Carson Ernst, a third-year construction management major. “In essence, we’re to make the documents that a mechanical subcontractor would submit to an owner’s representative or general construction manager to bid on and win the project.”

The proposals were submitted, and the top three – Cal Poly, the University of Southern California and Central Washington University -- were judged by CPMCA member contractor representatives. The top teams then gave a live presentation to a mock client panel, which chose the winners.

The students’ proposals included project management plans for all plumbing, piping, HVAC (heating, ventilation, and air conditioning), controls, and any other work required to complete the project as described in the bid documents.

The teams were asked to propose a plan to perform the necessary work, including BIM coordination BIM (building information modeling) coordination to locate and correct clashes with other crafts before fabricating or installing piping or ductwork.

industry advisors, whom we met with weekly to discuss issues we had encountered in creating our proposal,” Ernst said. “Our advisors were Joe Camacho of Murray Co.  and Anthony Gomez from ACCO Engineered Systems. Having industry advisors with a reliable contact avenue made it incredibly easy to get real-world answers to our questions and improve our subject matter knowledge.

“The six team members spoke during the final presentation; however, all members assisted in created the proposal, which got us to the final three,” Ernst said.